H-1B by the numbers: 3 data points illustrating the last decade of the visa program

The H-1B visa program is racking the American workforce, especially the tech workforce, with changes. In November, the Departments of Homeland Security, State, Labor and Justice are due to give President Trump reviews and recommendations for the program.

Many studies have demonstrated the H-1B program benefits American and foreign workers, which has resulted in a combined $17.3 billion income rise across countries in 2010 alone. A diverse talent pool drives tech innovation, and the presence of international workers has often been a key driver of such progress.

While the program could face changes in the future, understanding how it has contributed to the American workforce over the last decade and how it has changed since Trump's tenure is important.

Here is a breakdown of the U.S. Citizenship and Immigration Services data on the program:

The South Asian country consistently received the most H-1B visas for the last decade, and even more so the last year. When paired with No. 2 China, only 20-30% of other visas are allocated around for recipients from other countries.

While India-based IBM now has one-third of its workforce in its home country, it and other tech companies are changing their hiring practices to fall in line with Trump's "Hire American" directive.

It's getting harder to get in

This year saw the lowest approval rate of the last decade at just under 59%. No other year over the last 10 dropped below 2010's 74%, a still much higher percentage than 2017.

There is also an issue of increased demand. Since 2014, it has taken just five days to reach the cap of 65,000 visas, with an additional 20,000 set aside for graduate degree holders from U.S. universities. The program used to allow for the disbursement of 195,000 H-1B visas, but that changed in FY 2006 to the current allotment. 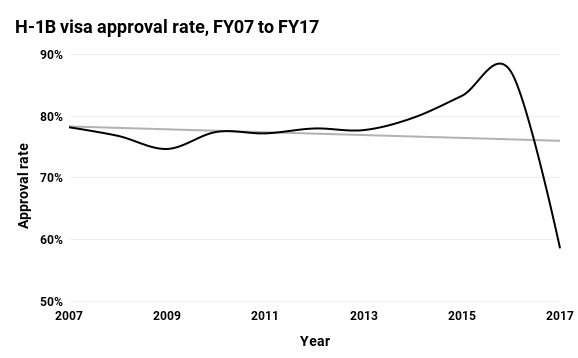 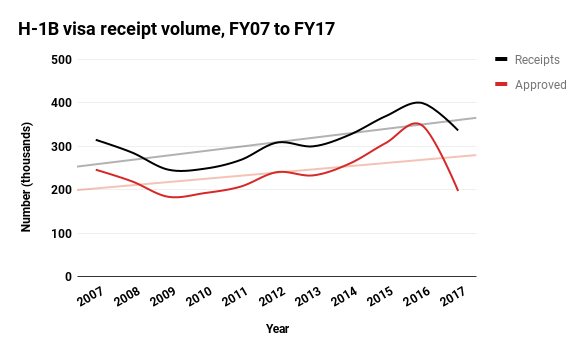 H-1B visas have remained on IT decision maker's radar because they affect so many tech workers, from developers to engineers to data scientists. Over the last decade, close to half of all recipients were selected for computer related skills. In 2017, these skills were exhibited by two-thirds of recipients.

These numbers speak volumes to America's stature as a tech hub, the prominence of U.S. based tech companies like Google, AWS, Microsoft and Oracle, to name a few, and the fact that tech workers are important to every company, tech-based or not.