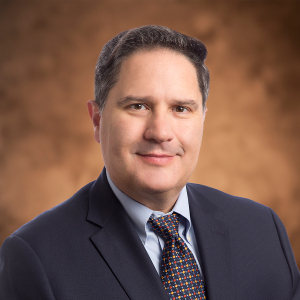 Innovation for innovation's sake means absolutely nothing. At the end of the day there has to be action associated with anything we do with innovation.

Perez is part of the UPS Managment Committee and serves as the executive advisor for the UPS Latino Business Resource Group.

Perez was part of the ORION development team, which was fully deployed this year and has helped save UPS $400 million.

CIOs are in quite a predicament. There is no such thing as a pause button. If there were, it would halt the daily demands of a business technology portfolio to make room for tech advancements that will take a company into the coming decades.

"You can either choose to be one of those technology leaders that's going to lead your organization into the future by bringing technology to drive new business," said Steve Hall, partner and digital advisory lead for ISG, a global technology research and advisory firm. "Or you can continue to be a CIO that's concerned about reducing costs and trying to maintain the data center security."

This inherent challenge has helped give rise to a generation of CIOs who are technology savvy but also understand the imperative for technology to contribute to a company's bottom line.

One particular executive who stands out is Juan Perez, chief information and engineering officer for UPS, our CIO of the year.

In his role, Perez supports global IT and engineering for UPS, combining aspects of UPS's portfolio that help drive innovation and delivery for the company.

Hover over a circle to learn more about each element.

More than 35 million people in 15 countries use UPS My Choice, which allows users to receive delivery email or text messages and control how and where packages are delivered. The service now features a chatbot.

Employed since 1991, UPS’s Delivery Information Acquisition Device (DIAD) is now in its fifth generation. More than 130,450 DIADs are in use daily.

UPS has more than 4,800 technology employees, who help maintain the company’s seven mainframes, more than 231,500 workstations and 21,200 servers.

UPS wants to adopt future technologies while preserving the iconic parts of its business. For example, UPS is investing in autonomous vehicles, but the goal is to create a more fluid delivery process, not eliminate drivers.

What is most impactful about Perez's leadership is that he does not consider UPS merely a logistics company. Instead, it is a technology company — a transition all modern businesses must make to remain relevant.

"We need to constantly communicate to the world that we're not simply a logistics company that does many great things for our customers, when in fact today [we're] a technology company," said Perez, speaking in October at Gartner Symposium/ITxpo in Orlando, FL.

Though branding companies across sectors as technology companies may seem overblown, it actively works to reset the perceptions of IT, internally and externally.

UPS works to reshape the mindset of skilled technology professionals to ensure it can recruit and compete with companies like Google, Facebook and Apple for talent, according to Perez.

Part of what makes Perez's leadership notable is his concerted effort to plan for emerging tech, understanding the needs of internal and external customers. With the company for more than 25 years — including an eight-month stint as UPS driver in Beverly Hills early in his career — Perez became UPS's CIO in 2016 and added engineering to his title in April 2017.

The technology portfolio at UPS has three key focuses: Enhancing mobility, empowering consumers, which allows customers to have full control over their personal supply chains, and understanding the impact emerging technologies have on innovation.

Part of the responsibility is to keep up with emerging technologies that dominate headlines. According to Perez, UPS is experimenting with advanced technologies such as:

The excitement of those technologies aside, Perez said, what has had the most transformational impact is data. "We don't think of data as a technology, but from my perspective, I believe that data continues to be the most important evolving technology for UPS," he said.

A prime example of this is ORION, the On-road Integrated Optimization and Navigation system for UPS, which Perez helped develop as part of the team. Before a driver leaves a facility, ORION crunches data at the rate of more than 30,000 optimizations per minute, creating the best route for drivers to follow.

Using telematics, cloud, map, customer and operations research data, to name a few, the system optimizes routes. Next year when ORION 3.0 debuts, the system will be able to optimize routes dynamically, Perez said.

By saving just one mile per driver per day during the course of a year, UPS immediately saves $50 million, according to Perez. Already, the ORION system has saved UPS $400 million.

The only way for organizations to successfully implement advanced technologies is to support a culture where innovation can thrive and value is attached to projects. Innovation without intention is meaningless, an idea Perez emphasizes.

Many organizations are prone to cultivating a culture of blame when projects don't go as planned, according to Larry Bonfante, founder and CEO of CIO Bench Coach. "Great leaders and great CIOs create a culture where people are free to experiment, innovate and try things with the understanding that, when things don't work out the first time, that's not failure. That's learning."

So how does Perez support innovation? He and other business leaders work to "free the geniuses" from among the 440,000 employees at UPS. Creating that culture will allow bright and different ideas to emerge.

With more technology help driving bottom line growth for companies, CIOs will have to focus on creating realistic long-term visions for their organizations. Getting caught up in emerging technologies without a sense of true value could derail a business IT portfolio.

View all | Post a press release
Nexthink Launches Infinity, the Most Advanced Analytics and Automation Platform for Digital Wo…
From Nexthink
Vaadin Releases Acceleration Kits to Speed the Development and Modernization of Enterprise Jav…
From Vaadin
TCS AI-Powered Decision Intelligence Platform Turns Data into Intelligent Actions
From Tata Consultancy Services
LayerX Emerges From Stealth To Launch User-First Security Platform For All Browsers
From LayerX
Editors' picks
Latest in IT Strategy
© 2022 Industry Dive. All rights reserved. | View our other publications | Privacy policy | Terms of use | Take down policy.
Cookie Preferences / Do Not Sell